Dia De Los Muertos is a South American tradition to honor our loved ones who have passed on. As a kid I lived in Mexico for a while and I remember the holiday fondly. We would go to the cemetery for a picnic and tell stories of those that had passed. There would be games to play, brightly colored decorations and lots of sweets. I remember these little cookies with skulls painted on them that were very tasty. The holiday usually falls about the same time as the American Halloween festivities. I think this is why Dia De Los Muertos is so misunderstood in America…skulls around Halloween just seems somewhat sinister to folks who don’t understand. It is anything but sinister. It’s a family affair and couldn’t be more wholesome. Families would decorate skulls in honor of their relatives. The skulls have symbolism that is relevant to that person and they would often have the person’s initials on the forehead. 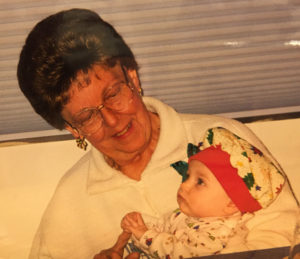 My skull for this project is to honor my mother-in-law, Marge Sontra, I called her Mom. She was a painter who specialized in line art on porcelain. She would work with brushes that had just a couple of hairs. Way more patience than I have! Here are a few pieces she did that live in my house. 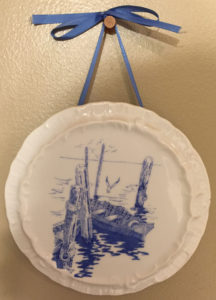 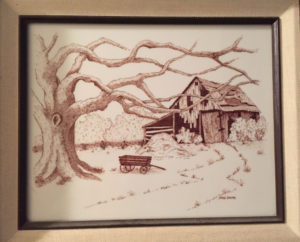 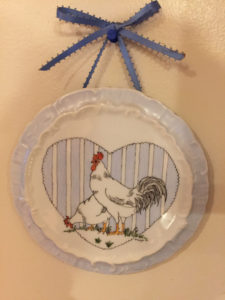 She was also an avid (as in DOZENS and DOZENS and DOZENS) collector of tea cups. Tea cups are not really my thing so I don’t have any of hers around. She preferred dainty cups festooned with flowers and greenery. Her favorite colors were lavender, robins egg blue and pink. Being of good English stock she liked her meat cooked to shoe leather and her veggies cooked to a nice uniform gray. She made the best potato salad EVER!

Mom died of breast cancer in 1999.  The doctors said she wouldn’t make it to the birth of my baby but she managed to hang on almost to Moosette’s 1st birthday. In turn Moosette did everything early – walking, talking, potty training…just so Grandma Marge could see her do it. Those two were a treasure to each other. I remember once when we popped in for a visit. Mom was getting ready to go somewhere and had put on a wig for the occasion. Moosette wanted nothing to do with her. Once Mom took the wig off then Moosette was ever so grateful for the rescue from that “stranger” who had tried to hug and kiss her. Her Grandma was bald and that woman was not – therefore she must be an impostor. One can never be too careful around strangers! The picture at the top is this moment. Moosette looks like she’s really nervous. She started bawling right after the photo. 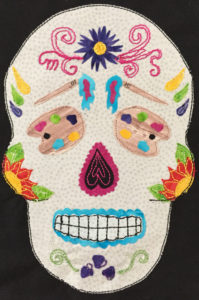 It seemed fitting that Moosette and I would design our skull together. Our Marge skull has palette eyes, paintbrush eyebrows, pretty flowers (the Aster on the forehead was Mom’s birth month flower) and, of course, little tea cups on the chin. There is a heart for love as well as swirls and flowers that were often on her tea cups. And I’m sure you noticed that she’s bald…we wouldn’t have it any other way! 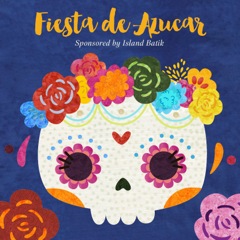 You can find full instructions and templates on my Craftsy page. All this awesomeness for a mere $3…can you even buy coffee for that anymore? Check out the next stops in the blog hop for more blocks. We’ll also have two different border options at the end. Make any project with at least one of our skull blocks, post a photo on our FaceBook group page and you get a shot at some great prizes. It’s really just that simple…

Beginning on July 1st through August 26th 2017 each designer will release their skull design. On September 2nd and September 9th there will be two border designs released. Here’s the schedule along with the participants and their blogs.