I am very excited to finally announce the release of my game for people of the quilting persuasion, Quilter’s Block Party. Many years ago when I first joined my local guild I was asked to be in charge of programs. Oh, and did we mention that there is NO budget, two meetings a month and nothing on the schedule for upcoming meetings? OK, great…see you in two weeks! I hastily put together a game to play at the next meeting and everyone enjoyed playing. Over the years we played several times and perfected the rules. A few months ago the current programs person said she couldn’t find the deck of cards (hand written index cards, very fancy!) and could I make another one…well, of course I could. Then it dawned on me… maybe there were other quilters out there who needed a fun game to play. I did a little research and found there was nothing like it on the market, looked into how to get a deck of custom cards printed, learned all about trademarks and started the long process, had the first prototypes made, hired a graphic artist (best money ever spent!), tweaked everything and we were off and running. A quilter’s game was officially born.

So, what’s the game all about? The deck consists of 54 cards each with a quilt block name and a drawing of the actual block. The folks are divided up into two teams. One person from the first team chooses a card and draws pictures to try and get their teammates to guess the quilt block name. They are not allowed to use letters, numbers or draw the actual block. For instance, if you chose Log Cabin you cannot draw a log cabin block but you can draw a house made of logs. If your team guesses in one minute you earn a point. If not, the opposing team gets a shot at stealing your point. Then it’s their turn. You continue on until the desired point level is reached or you run out of time. Drawing skills are not required. I have found that the stick figure drawing crowd actually does better. An extensive knowledge of quilt block names is also not required although it can be helpful to have that person on your team. Simple rules, easy to understand and lots of fun. 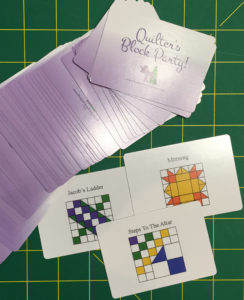 So what does the future of the game look like? There is already a second deck in the works that will have all different blocks on the cards. Each deck can be used independently of each other or combined for larger groups. We also have a book in the works. While someone could look at the block drawings on the card and draft out a pattern to make a quilt there are lots of folks who don’t like to do that, don’t know how or have no interest in that part of the process. We will make it easy and do the work for you. I’ve never written a quilting book before and I’m not sure how long that process will take but we’ll keep ya posted on the progress!

I am happy to say that the initial marketing tests have been extremely positive. Just today I had my first wholesale re-order. The shop sold out in one week and doubled their re-order. Big time happy dance here in Moose Country!!!

We will be having an official launch party in early June. We’ll have a blog-hop with some of my quilty cohorts complete with prizes and lots of fun. If you can’t wait until then you can always order a deck of your very own. They are on our website and we have cases of decks waiting to ship out. You can find them here.

So, check back and we’ll let you know all about the blog hop as we get closer. In the mean time…I have a book to write…and take better pictures…finish the next deck…and…sigh…so much to do…and happy dance!