About a week ago the electric company stopped by and clear-cut the front of our property. After some rather colorful language we were resigned to the fact that they do have a right-of-way under the power lines. They were kind enough to cut all the trees at the snow level which was about one to one and a half feet at the time. Now the snow is almost gone and we are left with a sea of stumps. Moose Geek suggested we sharpen all the stumps to defend ourselves and ward off all the trespassers that plague us. I politely declined and reminded him that we don’t get trespassers and more than likely WE would be the ones to be impaled on his moat of spikes. We’ll have to pull all the stumps later this year. Yippee, another thing to add to the to-do list… 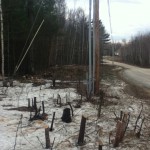 The nice folks from the electric company were so sweet that they took away all the tree trunks of the hardwood trees. They were also surely thinking of us when they left all the trunks of the less desirable pine and birch trees. Here is the pile we collected. At least we’ll have some mighty fine fire pits! 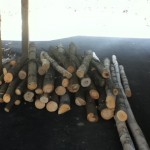 The pine trunks had been laying there for a good week oozing their pitch before we were able to pick them up. Try holding your end of a 10′ long tree at arms length while navigating a sea of stumps in the snow/mud. It doesn’t work. I now had a pile of three pairs of pants and three shirts covered with pine sap. Yuck.

I got on the internet and found several places that all recommended the same thing – hand sanitizer. No, really – stop laughing. I decided it couldn’t hurt to try. I squirted a liberal amount on the sappy areas and let it sit for about 30 minutes. Very little scrubbing, just enough to spread it around. Washed in the hottest setting on the washer and VIOLA – no sap and no stains! And the clothes are sanitized to boot! Moose Geek thought that sounded too funky so he did his clothes with Gojo with pumice. He did a lot of scrubbing too. Then he did some more scrubbing. His clothes came out the same as mine and Moosette’s only he worked harder.

So, if my electric company should happen to travel to your property and you end up covered with sap – you’ll know how to get it out of your clothes!