For my first official blog post I have decided to share about my recent heroic effort. Can I make a baby quilt in less than 24 hours? Well yes, yes I can…sort of. My daughter’s teacher is having a baby girl. Around bedtime last Tuesday I was informed that a baby shower was going to be Thursday after school. I had meetings all day Wednesday – this was going to be interesting. In all fairness to my daughter we had been discussing the baby quilt since the beginning of the school year. We wanted to do a project that got all the kids involved but kept getting sidelined by the complications of what to have the kids do and figuring out when to get them to do it. The project just sat on the back burner simmering. What I did know was it was for a baby girl so a little pink was good but not to froo-froo. It had to have purple in it (their team color) and since it was her hiking teacher it had to have something “outdoorsy.” One of my daughter’s favorite books when she was a toddler was Pat The Bunny so we had bought a copy of that book and decided on a bunny block. I had made a bunny block and two tree blocks. That brings us current to Tuesday evening.

When I arrived home from my all day Wednesday meetings and finished making dinner it was time to get started. All the plans we had previously were out the window since we were out of time. I stared at the bunny and trees and tried to figure out how to make it into something worthy of giving. Stitched the blocks together and added some borders then it was off to bed. Awoke early Thursday morning and layered up the quilt. After I got everyone off to start their days it was time to get it quilted, bound and delivered to school in time for the baby shower. While it is far from my best effort and will not win any prizes I think it turned out ok – and with one hour to spare.

So, what did I learn from this project? I really need to work on procrastination. I will never ever again use minky on the back of a quilt – it really slowed me down during free-motion quilting and made my swirls have lots of very ugly stops and starts because it wouldn’t glide. And, most importantly, I am proud that my daughter did not have to give a picture of a partially finished quilt as a gift (as I have done in the past) and the mom-to-be still loved it. 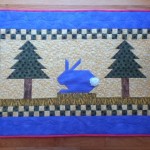 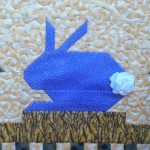